Anthony Martial continued his fairytale start to life in the Premier League with a double that helped inspire Manchester United to a 3-2 win at Southampton that moves them up to second in the table. 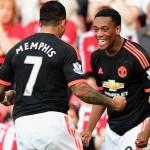 The £36 million deadline-day signing from Monaco made it three goals in two league games to turn the contest on its head after Graziano Pelle had opened the scoring.

The Saints looked the more threatening in the early exchanges and deservedly led when Pelle tucked home the rebound after David De Gea had brilliantly denied Sadio Mane from James Ward-Prowse’s sumptuous cross.

Pelle then hit the post before United drew level when the officials failed to flag Juan Mata offside, allowing the Spaniard to race onto a header forward and tee up Martial, who bamboozled Virgil van Dijk to fire past Maarten Stekelenburg.

A shocking backpass from Maya Yoshidia gifted Martial his second after the interval before De Gea produced another sensational save to deny Jose Fonte and retain the visitors’ lead.

It proved vital as United stretched their advantage when Mata crashed in the rebound after Memphis Depay had hit the near post.

Pelle nodded in his second of the game late on to set up a grandstand finale but De Gea and co stood firm to see it out.