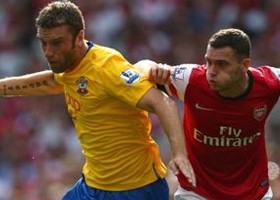 Victor Wanyama could return from a seven-week injury lay-off for Southampton, although Rickie Lambert is a doubt. Kenyan midfielder Wanyama suffered a hairline fracture to his leg in defeat to Aston Villa on December 4, but is line for a return against the Gunners. Artur Boruc (hand) should also be back after missing the 2-0 FA Cup defeat of Yeovil, although Lambert (hamstring) will need to be assessed. Dejan Lovren and Gaston Ramirez (both ankle) are definitely absent, as is Dani Osvaldo (club suspension).

Arsenal manager Arsene Wenger is able to welcome three players back into his squad for the trip to Southampton, but may rest Jack Wilshere due to an ankle problem. Midfielders Aaron Ramsey (thigh) and Mikel Arteta (calf) and defender Thomas Vermaelen (knee) are all back training, although Wenger is not planning on using any of them from the start. Wojciech Szczesny should return in goal after being rested for the FA Cup win against Coventry, while the same should go for Olivier Giroud who was a substitute in that game.