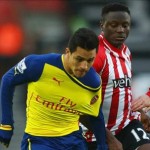 Maarten Stekelenburg faces a race against time to beat his toe injury to return for Southampton. The on-loan Fulham goalkeeper missed Saints’ 2-0 home loss to Tottenham, but boss Ronald Koeman hopes he will be fit to face the Gunners. Southampton can otherwise select from the same squad that took on Tottenham.

Arsene Wenger will not be able to welcome back any of his injured players for Arsenal. Alexis Sanchez has suffered a setback in his return from a hamstring injury, with the Chile forward missing Monday’s win over Manchester City and not expected to feature over the festive period. Jack Wilshere (leg) should be back in January while Mikel Arteta (calf) is not far away from a comeback. Francis Coquelin, Danny Welbeck, Santi Cazorla and Tomas Rosicky (all knee) are also missing.