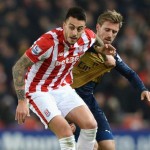 Arsenal survived a late assault from Stoke City to claim a point in a fraught goalless draw at the Britannia Stadium that saw them climb to the top of the Premier League.

The hosts were pegged back for much of the encounter, but could have snatched it at the death had they not found Petr Cech in inspired form.

The Gunners, who were without Mesut Ozil due to a foot injury, were below-par and created few clear-cut chances in a scrappy game.

And they found Jack Butland in fine form with the keeper denying Olivier Giroud twice and then Alex Oxlade-Chamberlain from distance. The second half was a similar affair with Petr Cech coming to his side’s aid with a string of fine saves while Aaron Ramsey headed off the line in the dying minutes following a corner.

Arsene Wenger’s side are joint top of the table with Leicester City and will now shift their attentions to the clash with Chelsea on Sunday while the Potters remain in seventh spot. Arsene Wenger Insists There Is “No Change” To His Contract Situation