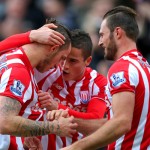 United have lost four competitive matches in a row within a single season for the first time since October-November 1961.

United have lost just one of 15 games with Morgan Schneiderlin starting and five of 11 without him.

Jack Butland has the best saves to shots ratio – 82% – of any goalkeeper in the Premier League.