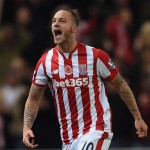 The first half had few chances, with both sides looking to keep control of the ball without risking too much in defence or attack.

The visitors didn’t seem to miss Mourinho’s instructions from the sidelines – he was nowhere to be seen as he served out his one-match ban – and shaded the first half. Diego Costa and Ramires both brought good saves from Jack Butland, while Glen Johnson forced Asmir Begovic to tip wide down the other end.

But the game was transformed In the second half when, after a quick passing move, Arnautovic sent a bicycle kick past Begovic to put Stoke ahead.

Pedro almost levelled for Chelsea when he sent a shot crashing against the post, and Loic Remy could have had a penalty when he had to leap out of the way of Butland’s sliding challenge, but the defending champions were unable to mount a serious challenge as the game drew to a close.