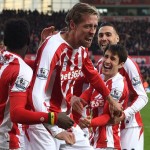 Ten-man Arsenal fell just short as Stoke City clinched a 3-2 victory in an entertaining game at the Britannia Stadium.

Peter Crouch had Stoke ahead inside the first minute after a slip from Hector Bellerin, and they doubled their advantage on 36 minutes when Bojan Krkic netted from a Jonathan Walters cross.

Walters then scored from Bojan’s corner just before the break to leave the visitors with a huge task for the second half.

Bojan thought he had made it 4-0 only to see the goal ruled out, and Arsenal then sparked into action, with Mathieu Flamini winning a penalty that Santi Cazorla converted.

Aaron Ramsey then added another for the visitors following a corner, but Calum Chambers then received a second yellow card and the 10 men were unable to find a third goal.