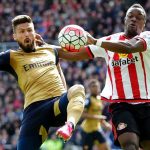 Sunderland climbed out of the relegation drop zone after battling to a deserved point against Arsenal at the Stadium of Light.

Indeed, with a little more luck, it could have been Sunderland who took all three points from their spirited performance.

Only the woodwork prevented Patrick van Aanholt’s free-kick from finding the back of the net in a first half that saw referee Mike Dean deny both sides penalties for hand balls in the box.

And it was Sunderland who looked the more likely in the second half, Arsenal having keeper Petr Cech to thank for denying Jermain Defoe and Wahbi Khazri with fine saves as the Gunners mustered only a shot on target in response.

The result means that Sunderland climb above Norwich into 17th on goal difference and still have a game in hand over rivals Newcastle United. Arsenal are level with Manchester City in joint third.