Manchester United collected their first point of the season but they again flattered to deceive in a 1-1 draw with Sunderland at the Stadium of Light. 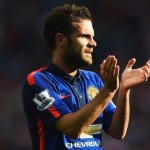 Watched by a crowd of 43,217, United moved ahead with their only meaningful attack of the first half when Juan Mata tapped the ball into the gaping net on 17 minutes after some fine wing play by Antonio Valencia wound up with the ball being deflected into the Spain player’s path.

Gus Poyet’s Sunderland had been the more vibrant side against a United side lack any notable pace, and deservedly equalised on 30 minutes when Jack Rodwell rose to power a header into the net from a Sebastian Larsson corner.

Both teams improved the longer the match progressed, but the most notable moment of the second period was perhaps the customary booking for United winger Ashley Young when he dived with former United defender Wes Brown clearly nowhere near the ball.

Louis van Gaal said after the 2-1 defeat by Swansea last week that United would need a miracle to win the Premier League. He is unlikely to alter his thoughts any time soon.

With or without the arrival of £64 million-rated Argentina winger Angel Di Maria from Real Madrid.