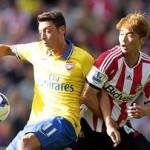 Sunderland have scored 15 own goals since the start of the 2010-11 season, more than any other Barclays Premier League side.

Arsenal are looking to win four Barclays Premier League away games in a row against Sunderland for the first time.

The Black Cats have won just one of their last 21 Premier League games against Arsenal.

Arsenal’s two league wins this season have come via a 90th minute winner against Crystal Palace in their opening game and 3-0 win at struggling Aston Villa.

Only two Premier League teams have kept a clean sheet after conceding 8+ goals in the preceding match (Arsenal in 2011 after losing 8-2 to Man Utd and Wigan in 2009 after losing 9-1 to Spurs).

Despite conceding eight to Southampton last time out, Sunderland (2) have kept twice as many Premier League clean sheets as Arsenal this season.

If Arsenal fail to win it will be their worst performance after nine games in the Arsene Wenger era (previously 13 in 2011-12).

If Arsenal lose they will have half the number of points they had at this stage last season.

Lee Cattermole has been booked in two of his last three Premier League appearances. His overall record is 65 in 212 games (plus seven red cards).