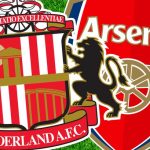 Arsene Wenger has conceded that it is now a two-horse race between Leicester City and North London rivals Tottenham Hotspur, but maintains his side have had a positive season, and are still looking to finish the season strongly.

Santi Cazorla has returned to training, though Jack Wilshere remains on the treatment table. Fourth-placed Manchester City provide the competition to keep Arsenal worried about their form.

Sunderland need to finish strongly to pull off another remarkable survival, with Norwich City and Newcastle United both providing stiff competition. Their 3-0 away victory at Norwich last weekend has given them hope – and Allardyce always enjoys rubbing up Wenger teams with his direct approach.