An error from Gylfi Sigurdsson, who looked uncomfortable in a holding midfield role all game, directly led to Oscar bounding forward and firing home the opening goal after just 48 seconds. 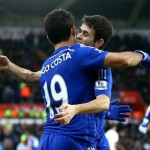 And though the hosts spent the following 10 minutes looking like they would be fine in the wake of Wilfried Bony’s departure for Chelsea’s title rivals Manchester City, they capitulated before the halfway point of the contest.

Another Cesc Fabregas assist created another Diego Costa goal on 20 minutes, shortly after the Swans’ only decent spell of the game concluded, before a nightmare two-minute period put Chelsea beyond sight.

A defensive howler gifted the ball to Costa inside the penalty area, where the Spanish international slotted home the third from a tight angle, before Oscar bagged his own second almost straight from the ensuing restart by the beleaguered home side.

Chelsea further exploited a terrible defensive display and could have been five or six up at the interval, but spent the second half content to see the game out – only adding one more as sub Andre Schuerrle nipped in to tap home Branislav Ivanovic’s square pass from close range just before Oscar could get there for the hat-trick.