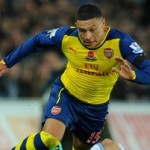 Arsenal have 17 points from 11 matches, eight fewer than they managed at this stage last season. They have only managed a worse start to a season (11 matches) once before in the Premier League era – in 2012/13 (16).

Swansea prevent Arsenal from earning three away wins in a row against the Welsh club. It is Swansea’s second win in eight matches in the PL (W2-D3-L3), after recording three straight wins in their opening three matches of the PL season.

Swansea will record only their second win in eight Premier League matches (W2-D3-L3), after managing three consecutive wins in their opening three matches of the season.