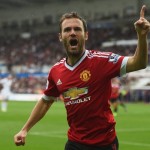 2’ – GOOD SAVE FABIANSKI: The keeper scrambles across to parry Depay’s direct free kick.

21’ – GREAT CHANCE MATA: Herrera moves it wide in the box to Mata but the Spaniard snatches at his shot from a few yards out and it misses the goal.

26’ – CHANCE SIGURDSSON: A lovely flick in the box from Gomis finds the midfielder but he fires just wide of Romero’s post.

28’ – GOMIS HITS THE POST: The striker cuts inside three defenders, including Shaw and Bling before firing a shot that clips the far post.

61’ – GOAL! Swansea City 1-1 Manchester United: They break quickly through Sigurdsson down the right and his pinpoint cross is met by Ayew who heads home past Romero.

66’ – GOAL! Swansea City 2-1 Manchester United: A majestic pass from Ayew finds Gomis on the box and he squeezes a shot under Romero. The keeper will feel he could have done better. Panther celebrations follow.