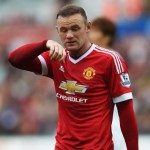 Swansea remain unbeaten in their opening four matches of a top flight season for the first time. Not since 1988/89 in the old Division Three have they remained unbeaten in their first four of a league campaign.

The game marks the 50th match in charge of Manchester United for Louis van Gaal.

Bafetimbi Gomis becomes the first Swansea player to score in each of the first four matches of a top flight season.

Juan Mata is now on 16 goals in 51 Premier League appearances for United. He netted 18 times in 82 matches for Chelsea.

Swansea have won four of the last five meetings with Man Utd in all competitions, all by a 2-1 scoreline.