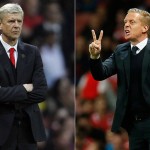 Since becoming Swansea manager in February 2014, Garry Monk has never lost a game at Arsenal. Despite the Gunners’ good start to 2015/16, he’s confident he can maintain that record on Saturday. Speaking to Uche Amako of the Express, he said:

“We’ve always had good games and we’ve had some good results. They are very tough games but we know when we are at our best we can give them a game. It will be a tough game but we will be in with a chance if we put our best foot forward on the pitch.”

For his part, Arsene Wenger seems surprised that Monk has come under any pressure at all this season. Speaking to Arsenal.com about Monk’s situation, he said: