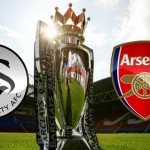 Arsenal’s annual injury crisis is underway. Their thin squad will be put to the test by a Swansea City team looking to build on a vital win at Aston Villa.

Last season, Garry Monk’s men beat Arsenal both home and away. However, Arsene Wenger’s outfit appear stronger this season, even with a host of injuries. This promises to be a tight game between two teams renowned for their attractive football.

Until beating Aston Villa, Swansea had been on a five-match winless run in the Premier League. They have also not won a league match at home since August. With that precious three points in the bag, they’ll be optimistic of improving their Liberty Stadium record.

Arsenal, meanwhile, have won four league games on the spin. They’ll hope to prove the defeat to Sheffield Wednesday was nothing more than a blip caused by fielding an unfamiliar lineup.