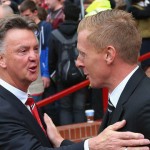 Garry Monk: “Let’s not forget they’ve only lost one of their last 15 league games so they’re very effective whatever way they play. It takes time as a manager to implement ideas. He’s gone in there with a couple of systems and the new way of training, and that takes time. The run they’ve been on and where they are in the league show what he does works. They’re already taking his things on board and I can only see them going from strength to strength.”

Louis van Gaal: “We came from the United States where we had won everything, so that was a big shock (to lose against Swansea on the opening weekend). After that we lost a lot of points even though we were the better team, because we couldn’t score enough at that time. I think that the confidence at this moment is the same as (after the tour). When you see the scores of the last 19 or 20 matches we are the best team in the league, so that is why I think confidence is also high like it was at the beginning. The players know and have experience of playing in the system with my philosophy.”