Manchester United spurned a host of chances as they were held to a goalless draw by Tottenham Hotspur in the Premier League at White Hart Lane. 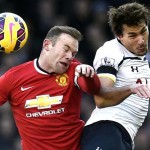 An unchanged United side completely dominated the first half, but found Hugo Lloris in supreme form, while the woodwork kept out a deflected Juan Mata free kick.

Spurs played much better in the second half, but neither side found a way through. The point guarantees that United will reach the midpoint of the Premier League campaign in third place while Tottenham continue to vie for fourth with the likes of Southampton, West Ham and Arsenal.