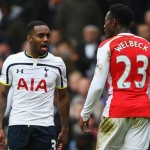 Tottenham have kept just one clean sheet in their last 33 Premier League matches against the Gunners.

Arsenal have not managed back to back away wins in the Premier League this season and have only managed it once since January 2014.