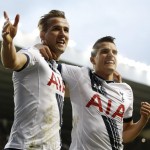 Harry Kane scored his 10th and 11th goals of the season as Tottenham kept their top-four aspirations on track with a routine win over Norwich.

After a slow start to the season, Kane has rediscovered the form that saw him burst onto the scene last season and score 31 goals in all competitions for Spurs .

The England striker, who was on loan at Norwich in 2012, won a penalty midway through the first half after being hauled down by Declan Rudd, and calmly clipped it over the keeper from the spot moments later. With Norwich on the ropes Kane added another, finding the bottom corner in clinical fashion after Dele Alli led the Spurs break and fed his England team-mate.

Alli, whose meteoric rise has been one of the major factors behind Tottenham’s excellent season, was superb throughout and came close to adding his name to the score sheet, but was denied by Rudd. Norwich offered little threat and Spurs killed off any lingering hopes of a Norwich fightback with 10 minutes to play with a brilliant Tom Carroll shot that flew in from distance.

The victory is Tottenham’s second in a row after their surprise defeat by Newcastle, and sees Mauricio Pochettino’s side consolidate fourth place and close the gap on Leicester at the top of the table to six points.