Tottenham got their unlikely title challenge back on track with a convincing win over Sunderland at White Hart Lane, with Christian Eriksen scoring a brace. 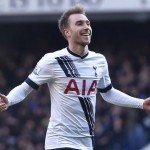 Spurs went into the game without a win in 2016 in all competitions, while visitors Sunderland arrived in north London looking to start a new year with three straight wins for the first time in 66 years. And the first half followed a predictable pattern, with Spurs struggling to break down the massed ranks of Sunderland and the visitors playing almost exclusively on the break.

Chances were few and far between until Adam Johnson’s peach of a pass picked out the run of Patrick van Aanholt in behind the Tottenham defence and the full-back scored with Sunderland’s very first shot on target.

But the lead didn’t last long – 91 seconds to be precise – with Eriksen scoring thanks to a shambles of a goal-line clearance by Lee Cattermole.

Spurs upped their game in the second half, but it was a tactical switch to a five at the back by Sam Allardyce that proved the turning point.

The introduction of Jan Kirchhoff for his Sunderland debut certainly made an impact, but not the sort that Big Sam would have wanted. The defender failed to close down Mousa Dembele as the Belgian put Spurs ahead, then only dangled a leg to deflect Eriksen’s shot beyond his helpless goalkeeper, and finally barged into Danny Rose to give away a penalty that Harry Kane duly dispatched to make it 4-1.

Sunderland – and hopefully Kirchhoff – will have better afternoons as they look to avoid relegation in the remainder of the season, while Spurs are back to winning ways and on track to make an unexpected title bid.