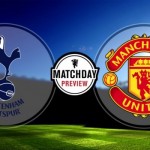 While Chelsea and Manchester City slug it out at the top of the Premier League, Louis van Gaal’s Old Trafford revolution gathers ever more momentum in the red half of Manchester.

The Dutchman endured a tricky start to his reign but seven wins in eight league games have put United hot on the heels of the pacesetters.

If the current United side can emulate the teams of Alex Ferguson who were renowned for a strong second half of the season, Van Gaal’s men could yet have their say in the destiny of the title.

United visit Tottenham Hotspur in a lunchtime kick-off on Sunday as the games continue to flow thick and fast over the festive period.

Seventh-placed Spurs have won three on the bounce with striker Harry Kane emerging as one of the stars of the season, his first-minute strike in the 2-1 victory over Leicester on Friday taking his tally to 15 in all competitions.