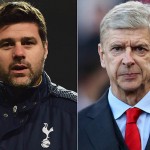 Spurs manager Mauricio Pochettino has seen his side respond well to defeats this season and will be hoping for the same reaction on Saturday.

“We need to be positive, why not?,” he told reporters after the defeat at Upton Park.

“The players are very disappointed and feel bad but the way we fought back tonight in the second half was fantastic, except we could not score.”

Including last week’s Champions League defeat to Barcelona, Arsenal have now lost three matches in a row for the first time since April 2010 and manager Arsene Wenger is worried his team have lost confidence.

“I am worrying about our results,” he said. “The players are very down but we have to respond. We have to focus on our job and remind ourselves that we have some quality as well.”