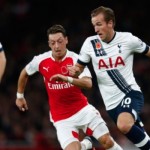 Tottenham Hotspur have lost only one of their last seven PL home matches against Arsenal (W4-D2), the 1-0 defeat on 16 March 2014 (goal by Tomáš Rosický).

All four of Spurs’ victories in these last seven PL meetings at White Hart Lane were by a 2-1 scoreline.

Arsenal have scored in 33 of the last 34 PL North London derbies. They only failed to score in that period in the 0-0 draw at White Hart Lane on 8 February 2009.

There have been 133 goals in this fixture (home/away) in the PL. Only PL matches between Liverpool/Spurs and Liverpool/Newcastle United (both 134) have produced more.

In the reverse fixture this season, it finished 1-1 on 8 November. Kieran Gibbs (77′) scored for Arsenal after Harry Kane (32′) had given Spurs the lead.

These teams have already met at White Hart Lane this season, in the League Cup third round on 23 September. Arsenal won 2-1 with a Mathieu Flamini double (Calum Chambers own goal for Spurs).

Arsenal could beat Spurs at White Hart Lane more than once in the same season for the first time since 1986/87, when the Gunners won 2-1 three times at the home of their North London rivals, once in the league and twice in the League Cup (semifinal second leg and semifinal replay).