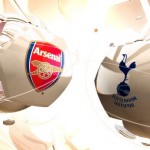 Arsenal face Tottenham at 12.45pm on Saturday, with Spurs having a chance to leapfrog their arch-rivals in the Premier League table.

However, Arsenal could move just three points behind second-placed Manchester City with what would be a sixth successive victory on Saturday lunchtime.

Spurs manager Mauricio Pochettino has seen his faith in 21-year-old striker Harry Kane rewarded with an impressive 20-goal haul, including a brace in the 3-0 win at West Brom last weekend; while the visitors will almost certainly be without talisman Alexis Sanchez.