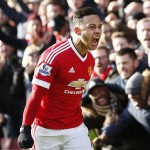 11’ – GOAL! Watford 0-1 Manchester United. Memphis scores – A first-time, whipped cross from Herrera finds Memphis ahead of his marker, and he side-foots a volley into the net. An excellent goal.

27’ – SCHNEIDERLIN CHANCE – Free kick on the left for United. Mata takes, fired in low, and it’s back out to Rojo. Watford can’t cross and Schneiderlin seizes on a loose corner, and volleys just over from a wide angle.

39’ – MEMPHIS SHOT – Memphis cuts in from the left and forces Gomes to dive to the right to push the shot past the near post.

70’ – DE GEA SAVE – David de Gea dives right to push away a deflected shot from Abdi after United failed to clear the ball.

86’ – PENALTY! Rojo pulls down Ighalo in the box, and slides through him at the same time.

87’ – GOAL! Watford 1-1 Manchester United. Deeney scores – De Gea dives to his right, but Deeney’s shot is just behind him and Watford have their equaliser.

90’ – GOAL! Watford 1-2 Manchester United – Deeney scores an own goal. Watford struggle to clear again and again. Lingard shoots, Gomes palms it out. Schweinsteiger tries to squeeze in a shot and Deeney’s sliding attempt to block takes it over the line.