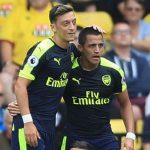 Arsenal become the second team, after Manchester United (798), to score 700 PL away goals. The Gunners’ first PL away goal was scored by Anders Limpar in the 2-0 win at Liverpool on 23 August 1992.

For the first time since 4 May 2015 at Hull, Arsenal have scored three goals in the first half of a PL away match.

Alexis Sánchez has scored in all three PL appearances against Watford (total three goals). He has only scored more PL goals versus Leicester City (4).

Santi Cazorla scores his first PL goal since 21 February 2015 (then at Crystal Palace). He has now converted seven of his eight penalties in the PL.

Twelve minutes after making his debut in the PL, Roberto Pereyra scores his very first goal for Watford.

AS Roma To Bid For Arsenal Target Yohan Cabaye