Arsenal kick-started their Premier League campaign in emphatic fashion, turning on the style to rout a lacklustre Watford 3-1 at Vicarage Road. 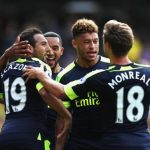 The impressive Santi Cazorla got the ball rolling with a ninth minute penalty after Nordin Amrabat elbowed Alexis Sanchez in the box, and the latter doubled Arsenal’s lead when he turned home Theo Walcott’s cross.

Mesut Ozil, starting for the first time this season, made it three right on half time, heading home Sanchez’s cross with not a Watford defender in sight.

Watford improved after the break and pulled a goal back when substitute Roberto Pereyra slid home ten minutes into his debut. Petr Cech kept Watford out with a couple of smart saves but, in truth, it was a comfortable and much needed victory for Arsenal.

Arsenal’s first win lifts them to seventh in the table, one point behind north London rivals Tottenham Hotspur. Watford drop into the relegation zone at the start of what could be a tough fight for survival.