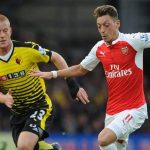 Though Watford have only picked up a point in their first two league games there was plenty of cause for optimism in a draw at Southampton and a home defeat to Chelsea, against whom the Hornets led until the 80th minute.

But Mazzarri’s bubble was soon burst in the EFL Cup. Though they fielded a relatively strong side, including Troy Deeney, to take on Gillingham Watford fell to a 2-1 defeat in extra-time, Bradley Dack snatching the winner.

Arsenal find themselves on the same number of points as Watford, a meagre one from their opening two games. What little pre-season optimism there had been around the Emirates was swiftly burst in a 4-3 loss to Liverpool where the Gunners conceded all their goals inside 18 minutes.

Laurent Koscielny’s return helped Arsenal to a nervy 0-0 draw at Leicester but Alexis Sanchez continued to plough a lonely furrow up front. Olivier Giroud Warns Arsenal Not To Underestimate AS Monaco