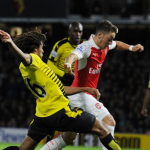 Watford have lost all six of their games against Arsenal in the Premier League, although they did beat the Gunners last season in an FA Cup quarter final match (2-1).

Arsenal have won seven of their last eight matches against Watford in all competitions (L1).

Indeed, Watford haven’t beaten Arsenal in league competition since a 1-0 win in April 1988, courtesy a goal from Rick Holden.

Watford have been leading at some point in each of their two Premier League matches this season, but have claimed just a point from these games (W0 D1 L1).

Etienne Capoue has scored in both of Watford’s Premier League games this season – no Watford player has scored in each of their opening three top-flight matches within a season.

Arsenal have collected one point from their opening two Premier League matches of 2016-17; their lowest tally at this stage since 2011-12 (also one point).

The Gunners’ lowest points tally after three Premier League matches in a season is one point, also set in 2011-12. They finished that season in third place.