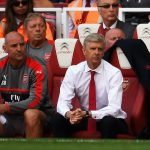 Watford head coach Walter Mazzarri on record signing Roberto Pereyra: “Pereyra is an eclectic player, he can play in many different positions. He can play on the wing, as a striker and is a more offensive player.

“He is a runner with good dribbling abilities and in my opinion we needed him. He was the missing point in our squad. He has got different characteristics to other players.”

Arsenal manager Arsene Wenger: “It was a strange transfer market. I expected it to be easier than ever but it was more difficult than ever. Not a lot has happened.

“It looks like when you meet other clubs and you have an English passport, you hit these prices which are very difficult to understand compared to the quality of the players. It looks like it will be frenetic for me in the last three days.

“Everybody has sat on their pounds until now. We know they will all splash out now. I expect the next three days to be very, very busy, so be on alert!”