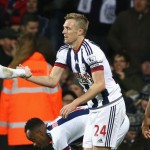 Darren Fletcher scored for West Brom thanks to a Karl Darlow howler as they beat Newcastle United 1-0.

Newcastle had a chance to finish 2015 out of the relegation zone if results went their way, and so started both Aleksandar Mitrovic and Ayoze Perez.

West Brom dominated but should have conceded a penalty when Jonny Evans dragged Mitrovic to the ground – the referee gave nothing. Eventually. the pressure told when a Darlow error let Fletcher’s header in. Darlow was only starting after Rob Elloit became unwell in the warm-up.

Tony Pulis hinted at trouble with Berahino before the start of the match, with it looking likely he will soon exit the club in the January transfer window. Steve McClaren will be hoping for one of his senior ‘keepers makes a swift return to action before he even consider any transfers.