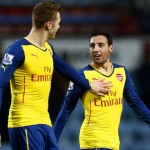 Santi Cazorla has netted his third PL penalty of the season – the joint-most in the division, along with Jedinak & Berahino.

Danny Welbeck has scored in each of his last two PL starts against West Ham (for Man Utd & Arsenal).

Alexandre Song faces his former club Arsenal for the first time in the PL. Song played 138 PL matches for Arsenal from 2005 – 2012.

Cheikhou Kouyate has scored his first Lge home goal since netting in Anderlecht’s 4-3 home defeat v Lokeren in May 2011.

West Ham have won none of the last 12 Barclays Premier League games against Arsenal (W0 D2 L10), losing the last eight in a row.

Arsenal have won away at West Ham more often than any other team in Premier League history (11).