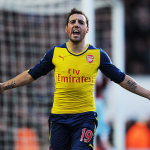 Arsenal climbed above West Ham and Spurs to fifth in the table after a hard fought victory at Upton Park.

West Ham were arguably the better side for long periods of the game but found themselves 2-0 down moments before half time after Santi Cazorla’s third penalty of the season and Danny Welbeck’s tap-in from Alex Oxlade-Chamberlain’s cross.

The second half brought more chances for both sides in a pulsating encounter and Cheik Kouyate’s first for his club saw West Ham get a foothold in the game.

A string of fine saves from Adrian kept the Hammers in the game and they had chances themselves to level against a visibly nervy Arsenal before the visitors held out for victory.

The result means that Arsenal leapfrog both West Ham and north London rivals Spurs to fifth, the Hammers dropping a place to sixth, two points behind.

Swansea Fullback Neil Taylor Delighted To Be Linked With Arsenal