Andy Carroll headed a brace as West Ham moved up to third in the Premier League table with a 3-1 win over 10-man Swansea at Upton Park. 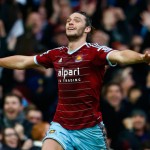 The England forward gave a reminder of his undeniable ability with his first goals since March to clinch an impressive comeback victory for Sam Allardyce’s men.

The former Liverpool striker powered in a superb header from Carl Jenkinson’s hanging right-wing cross four minutes before half time to net on home turf for the first time in 18 months. And he did it again after the hour when he rose to thump home Stewart Downing’s corner.

It cancelled out Wilfried Bony’s well-executed opener as the Ivorian swept Jefferson Montero’s cutback into the net with Swansea’s first attempt of the match to snare his 19th Premier League goal of 2014.

Bony could have restored Swansea’s lead when he crashed against the bar just prior to Carroll’s second, but in truth, the visitors were second best for long spells and saw their hopes dashed when they were reduced to 10-men in controversial circumstances 22 minutes from time.

Lukasz Fabianksi came racing out of his area and caught substitute Diafra Sakho as he beat the keeper to the ball. The striker carried on and hit the post from a tight angle, leading to referee Chris Foy pulling back play and showing the stopper a straight red card.

From that moment on Swansea were up against it and West Ham sealed victory three minutes from time when Sakho latched onto Carroll’s flick on to fire an explosive finish into the net.