Andy Carroll hit a hat-trick as West Ham dented Arsenal’s slim title hopes after an enthralling 3-3 draw at Upon Park. 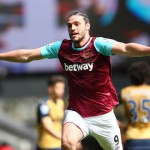 The towering forward gave England boss Roy Hodgson a timely reminder of his aerial capabilities and what he could offer at Euro 2016 with three goals in just under 10 minutes either side of the interval to turn the game on its head.

Arsenal had looked like giving real credence to their bid to push Leicester all the way in the race to finish top by roaring into a two-goal lead through Mesut Ozil and Alexis Sanchez.

But they struggled to cope with Carroll’s presence throughout and the Hammers forward struck twice at the end of the first period to level before heading in a third just after the break. It was a microcosm of the troubles that have blighted Arsenal’s title challenge in recent years, with a fine start thwarted by a mini meltdown.

Laurent Koscielny’s thumping finish 20 minutes from time gave the Gunners hope but they couldn’t find a winner and are now a massive 10 points behind the Foxes with six games apiece to play.

In a contest that had everything, both sides needed a win to boost their respective aims but the draw leaves Arsenal’s dreams in tatters while West Ham’s attempt to gatecrash the Champions League spots suffered a blow.

The Hammers are now 10 matches unbeaten but remain sixth, two points behind fourth-placed Manchester City who can extend that advantage when they meet West Brom at home on Saturday evening. Arsenal will be hoping Sunderland can do them a favour against Leicester on Sunday, but in truth they need Claudio Ranieri’s men to suffer a spectacular wobble to land the Premier League title from here.