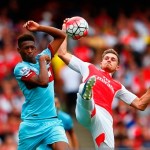 Arsenal have won just one of their eight Premier League trips to top half teams this season (at Leicester).

Alex Iwobi’s two goals in his first two Premier League matches has only been matched by Ian Wright and Davor Suker at Arsenal.

West Ham are the ‘Kings of London derbies’ this season, winning 14 points from seven matches. Arsenal have five points from six matches so far.

Sanchez scored and assisted in the same Premier League game for the first time since April 2015 last weekend.