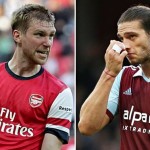 Arsenal manager Arsene Wenger needs no reminding of just what an important player Alex Song can be as he prepares his side for a quick turnaround at West Ham on Sunday.

The Gunners – who beat QPR 2-1 at the Emirates Stadium on Boxing Day, where striker Olivier Giroud was sent off for a headbutt on Nedum Onuoha – make the short trip across east London to Upton Park looking to maintain their push towards the Barclays Premier League’s top four.

West Ham may have lost at Chelsea on Friday’s lunchtime kick-off, but remain confident following a superb opening half of the campaign, which has seen both Liverpool and Manchester City beaten at the Boleyn Ground.