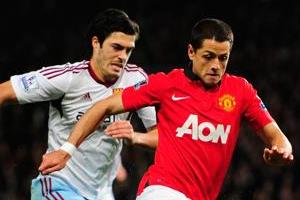 West Ham manager Sam Allardyce will still be without defender Joey O’Brien and forward Marco Borriello when reigning Premier League champions Manchester United visit Upton Park. O’Brien has not featured since a 0-0 draw at Chelsea in January due to a dislocated shoulder and on-loan AC Milan striker Borriello remains sidelined with a calf injury. Midfielder Joe Cole came off the bench in last weekend’s defeat at Stoke for only his second league appearance of the year and will be pushing for a start against the Red Devils.

Manchester United striker Robin van Persie will miss the game because of a knee injury. United will assess winger Antonio Valencia after he sustained a black eye against Olympiacos in midweek. Defenders Jonny Evans (calf) and Chris Smalling (hamstring) are doubtful, but Nemanja Vidic is definitely out through suspension.