Manchester rivals City and United have spent the most of all the Premier League clubs this summer. 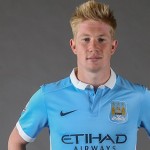 Man City forked out close to £160million on the likes of Raheem Sterling, Kevin De Bruyne, Nicolas Otamendi and Fabian Delph to head neighbours United, who spent near on £110m.

Third on the list is Liverpool who invested more than £75m on Christian Benteke, Roberto Firmino, Nathaniel Clyne and Joe Gomez.

Making up the Top 5 is Chelsea and Aston Villa who both cleared the £50m-mark.