It has been reported that Club Brugge boss Michel Preud’homme admitted his side struggled with the aerial threat posed by Manchester United’s Marouane Fellaini in their 3-1 defeat to the Red Devils at Old Trafford on Tuesday. 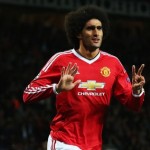 Preud’homme said the tasking of marking Fellaini was made more difficult by the 80th minute dismissal of Brandon Mechele for a second bookable offence.

“He is still my friend, of course,” Preud’homme said of Fellaini, who he won the Belgian Pro League title with at Standard Liege in 2008.

“If you lose one central defender, it’s difficult to mark all the good headers of the other team.

“Even if they’re marking him, he’s so strong with his head, so it’s always difficult. We know him very well. I used him in this situation many times before.

“But you need to have the players to stop him and with one player less, it was difficult to do that.”