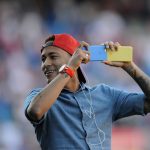 It has been revealed that PSG have been encouraged in their interest for Barcelona superstar Neymar.

The Daily Mail says they are hopeful that they can sign Neymar this summer.

The French club are considering activating his £153million release clause in what would be the blockbuster signing of the summer and make him the world’s most expensive player.

PSG are preparing for life without Zlatan Ibrahimovic next season and sources in France have said that Neymar, previously linked with Manchester United, is seen as a high-profile replacement. United are sure to show interest too, but the UK tax laws will impact on landing him.

Neymar’s adviser Wagner Ribeiro has told L’Equipe: “He feels good in Barcelona, he’s loved over there, and he’s playing for the best team in the world,’ Ribeiro said. ‘It’s no small feat to impose yourself at such an enormous club.

“But the prospect of living in a city like Paris and to play for a club like PSG – that’s also a dream for every player.” Arsenal Boost As Giroud Returns Ahead Of Schedule From Broken Leg