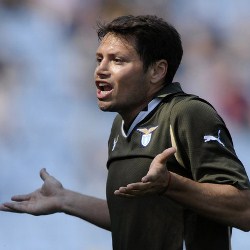 Sportitalia has reported that the Ligue 1 club are hoping to sign the Argentine striker before the transfer window closes.

Lazio have suggested that they will be willing to listen to offers for the striker, but only if they are in the region of €20m.

Zarate, who had a loan spell with Premier League side Birmingham, could consider leaving the Stadio Olimpico outfit after the club signed Miroslav Klose and Djibrill Cisse.