Reports are out claiming that PSG chiefs are discussing a move for Arsenal boss Arsene Wenger. 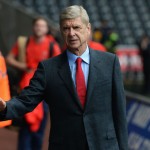 L’Equipe claims that an approach could even be made in the coming weeks, with the French champions’ hierarchy concerned about Laurent Blanc’s failure to inspire the club to success in Europe.

PSG have been knocked out at the quarter-final stage of the Champions League in both of Blanc’s seasons in charge.

However, Wenger hasn’t taken Arsenal beyond the last eight of the competition since 2009.