Reports have emerged claiming that PSG are preparing a double raid on Chelsea for Eden Hazard and David Luiz. 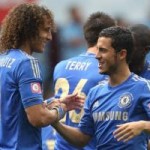 L’Equipe claims that Hazard remains Paris Saint Germain’s top target for this summer, and they could also add his Chelsea team-mate David Luiz in a double swoop.

Ezequiel Lavezzi, Javier Pastore and Marco Verratti could all go for the right price.