Reports are out claiming that PSG are ready to test Chelsea’s resolve this year for Eden Hazard. 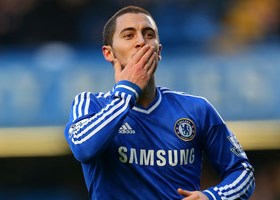 The Daily Star reported that the French champions are readying an audacious bid to sign the Belgian international and will wait until the end of the season to make their move.

It is said that PSG president Nasser Al-Khelaifi is a huge admirer of the 22 year old, and will offer the former Lille star a bumper contract to return to France next summer.

Manager Laurent Blanc has made the signing of a new creative midfielder at the club a priority after splashing £53m on Uruguayan striker Edinson Cavani in the summer.