It has been reported that French champions PSG are eyeing Real Madrid striker Karim Benzema as a replacement for Edinson Cavani. 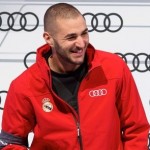 The Uruguay international’s future remains clouded, despite the 27 year old publicly committing himself to the Parisiens.

Fichajes.com claims that should PSG be forced to part with the striker, with Arsenal favourites for his signature, they will move for Benzema.

Benzema, it is understood, would welcome a return home to France.

Significantly, PSG have the spending power to better the current terms Benzema is earning at Real.

Marcelo : We Are United At Real Madrid!