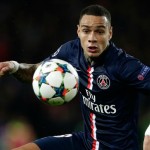 It has been reported that Paris Saint-Germain are set to step up their pursuit of Manchester United winger Angel Di Maria.

The Express reports that the French giants will offer Gregory van der Wiel in a bid to sweeten a potential deal for Argentina international Di Maria.

United have been linked with Southampton’s Nathaniel Clyne and Barcelona’s Dani Alves – both right-backs – which PSG is acutely aware of.

The fact that the Ligue 1 champions have had their summer transfer budget restricted to £42.5million has forced them to offer van der Wiel as they continue to chase Di Maria who had a sub-par season with the Red Devils after joining from Real for close to £60m last summer.