Reports are out claiming that PSG are drawing up plans to bid for Manchester United winger Angel di Maria at the end of the season. 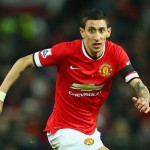 The Argentine international has been unsettled after his family were the victim of an attempted home invasion last week.

PSG are desperate to sell Edinson Cavani and Ezequiel Lavezzi so to meet Financial Fair Play (FFP) regulations – and thus enabling them to fund a move for Di Maria, says the Daily Star.

The French champions were desperate to sign Di Maria when he left Real Madrid but were prevented from making a bid due to FFP restrictions.